So it’s been over a month since the pre release of Orphan Sisters, my first published novel in five years. I see that publishing has moved on since 2012. The Internet is  now a huge part of the publishing process now and the popularity of e-books have advanced and plateaued during that time. 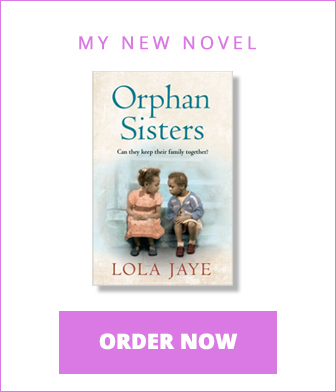 This will be my fifth novel and I have never had a pre release before. But this time, the hardback and e-book editions were released on June 1st – three and a half months before the mass-market paperback. It’s different but also really good, as it gives me a chance to gather reviews online before the ‘big day.’

Right now I’m also writing my sixth novel, so my head is filled with an all new set of dysfunctional ‘people’ and intertwining plot directions! It’s also set almost two decades before Orphan Sisters, during World War 2 and this is a big change that will require a lot of research.

What is similar and has been for every single book I have had published, is the sheer joy I get from talking about my characters as if they were real. This happened last week after a very impromptu book reading at a gathering for creatives. Verbally, I was able to introduce the two main characters, Lana and May out into the world for the very first time and it felt thrilling… and terrifying! Apart from the usual neurosis fuelled battle in my head (what if no one likes them as much as I do?) I really enjoyed this process. In five years I had forgotten just how much.

I’m pleased to say ‘my girls’ were well received. These characters which had lived in my head, and then on a page and then out into the atmosphere, had flown the nest to make their own way in life.

Now, today and with just over two months to go until the official launch date of Orphan Sisters, I’m looking forward to the book reviews. I have already had a few and they have been amazing. I remember trawling through reviews for my previous books and choosing to focus on the very few that were negative. Why do we do that as humans? Ignore the positive and focus on the very few which are not? I have told myself I wont do that this time. I can’t promise I wont, though.

Having a book published after five years, has reminded me of just how much I love meeting and hearing from readers who have read and loved my work. When you’ve spent the best part of a year alone at your desk writing the novel, it’s this sheer joy that always creeps up – coupled with a reminder of why I don’t actually want to do anything else.

Orphan Sisters is out TODAY! I'm serious. IT IS!!

How I Wrote a Novel in 12 Weeks

RT @BarackObama: Congratulations to my friend, President @JoeBiden! This is your time. https://t.co/LXzxGnBAfz
Reply Retweet Favorite